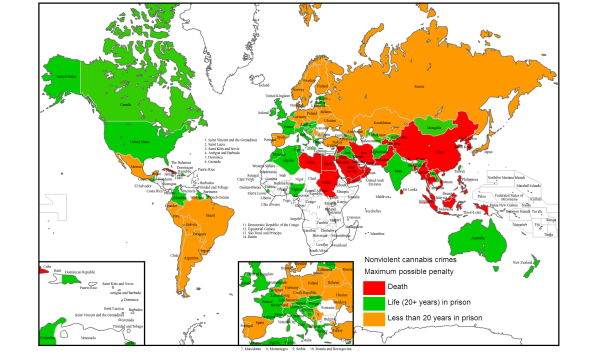 Everyone knows different countries treat drugs differently. For example, if you get caught buying or selling a large amount of marijuana in Canada, you’re probably not going to get your head chopped off by the government–but in Saudi Arabia, that is the law.

I wanted to see just how different the laws were in world when it came to nonviolent marijuana crimes: that is, if one or more people are breaking a marijuana-related crime (like buying, selling, smoking, or producing) and they didn’t hurt anyone in the process, what is the worst that can legally happen to them?

So I made the following map. I primarily relied on two sources:

1. http://www.legislationline.org/documents/section/criminal-codes Which has the English translation of many countries’ criminal codes
2. http://www.ihra.net/files/2010/06/16/IHRA_DeathPenaltyReport_Web1.pdf Which gaves detailed breakdowns of countries that have the death penalty for drug offences

And for countries not the in the above two sources, I manually searched the internet for their penal codes, occasionally using Google Translate to help me out.

So here are the results. Rmemember, this is a map of the maximum punishment you can receive for nonviolent marijuana offences. So if you are a nonviolent producer, seller, user, distributor, importer or exporter:

Green countries will (potentially) throw you in prison for at least 20 years for committing certain nonviolent marijuana crimes;

Orange countries will (potentially) imprison you for some period of time less than 20 years for committing certain nonviolent marijuana crimes.

(White countries I either couldn’t find the law for, or I found their legalese unclear.)

Hopefully one day we’ll live in a world where no one is thrown in jail for nonviolent marijuana offences.

I'm senior economist at Housing Matters, a Toronto-based not-for-profit YIMBY group. In addition to housing policy, I also like to read and write about intellectual property, money & banking, and methodology. Other random things I'm interested in include space, physics, 3D printing, entrepreneurship, the English language, and internet culture. View all posts by Ash Navabi