A “motte and bailey doctrine” is a style of argument (and informal fallacy) that’s based on a motte-and-bailey castle. The bailey is a big courtyard and where people live and work and generally want to be. The motte is a mound with some kind of fortification on top, that’s used as a last refuge when the bailey is under attack. 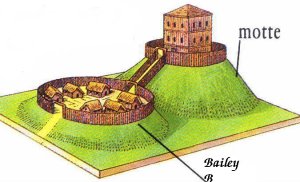 A motte and bailey doctrine for arguments goes like this: someone is usually making an argument from a big and comfortable courtyard of ideas, being very liberal with their terms, accusations, and implications. But when someone attacks their argumentative “bailey”, they retreat to a “motte” of strict terms and/or rigorous reasoning. They can’t be attacked at the motte because even their opponent would agree with their definitions and reasoning. The problem is that the motte and the bailey are different arguments: often to get to the bailey, additional assumptions are required; sometimes the arguments are even contradictory.

The first person to identify this fallacy was Nicholas Shackle, and it was later brought to wider attention by Scott Alexander on his blog Slate Star Codex.

Shackle invented the term to identify problems he saw in postmodernism. Alexander identifies some more popular and contemporary identifiable examples, for instance when some feminists argue that in order to be feminist one has to support specific and controversial laws and social norms, but when challenged they retreat to the motte that feminism just means “women are people” or something similar.

Economists do this too. For example, the typical mainstream economist will argue from the motte that mathematics is used to sharpen our thinking, or add more precision to our language and arguments.

But then they will make arguments from the bailey such as firms set prices as if a magical fairy told them to change their prices, or that capital is infinitely divisible and/or homogeneous, or competition is best when firms are infinitely small–and the government should then make policies based on these arguments.

Another instance of the motte and bailey doctrine of economists comes to econometrics. Often you will hear economists claim that econometrics can falsify theories. They will disparage a particular theory they don’t like because it lacks empirical or econometric support, and therefore the theory is invalid. However, when they do this, they are arguing from the bailey.

No economist today will overturn their belief in the law of demand, for example, if an econometrics paper showed that an increase in the price of socks led to more people buying socks. Thus, when pushed, economists will insist from atop their motte that econometrics can at most “inform” or “guide” theory, not prove or disprove it.

The motte and bailey doctrine is real, and problematic because it stifles debate. An argument with contradictory definitions is not an argument worth having. Be mindful when your opponents retreat to their mottes.

And try not to argue from any baileys yourself.

I'm senior economist at Housing Matters, a Toronto-based not-for-profit YIMBY group. In addition to housing policy, I also like to read and write about intellectual property, money & banking, and methodology. Other random things I'm interested in include space, physics, 3D printing, entrepreneurship, the English language, and internet culture. View all posts by Ash Navabi