END_OF_DOCUMENT_TOKEN_TO_BE_REPLACED

Building more homes just became easier in two of the most densely populated areas in Ontario: Toronto’s downtown core and its “midtown,” a small strip of land centred at Yonge St. and Eglinton Ave. For anyone interested in finding a place to live in those areas, this is great news. END_OF_DOCUMENT_TOKEN_TO_BE_REPLACED

END_OF_DOCUMENT_TOKEN_TO_BE_REPLACED

However, as we will explain below, this policy has long term impacts that affect the quantity, quality, and price of rental housing, as well as the kind of individuals likely to be affected. In particular, this new policy averted a future of extreme rental shortages, declining rental housing quality, rapidly increasing rents, and discrimination against low-income renters. END_OF_DOCUMENT_TOKEN_TO_BE_REPLACED

One of the most popular proponents of BE is Rory Sutherland (who I’ve been praising for years), an ad executive with Ogilvy Mather. The interesting thing about Sutherland is that he also calls himself a follower of Mises, in addition to promoting popular BE concepts and nudges. He once gave a talk at Google titled “Praxeology: Time to Rediscover a Lost Science.” Praxeology, of course, was Mises’s preferred term for the general science of human action.

One quote he’s quite fond of, which he attributes to Mises, is “There is no sensible distinction to be made between the value a restaurant creates in cooking the food, and the value the restaurateur creates by sweeping the floor.” While I haven’t been able to source that exact quote, I do know that he made this statement in the section titled “Business Propaganda” in Human Action:

“If the manufacturer of candy employs a better raw material, he aims at an increase in demand in the same way as he does in making the wrappings more attractive and his stores more inviting and in spending more for advertisements.”

END_OF_DOCUMENT_TOKEN_TO_BE_REPLACED

In a world without intellectual property, would it be possible to buy and sell secrets? I suggest the answer is yes. In this post, I provide both a theoretical framework for such markets, as well as pointing to real life examples of such markets already existing.

In a previous post, we talked about why information is the only public good. But of course, it’s possible to keep information private. Such private information is called a secret. Currently, entrepreneurs and inventors have two choices when they have what they believe is a profitable secret: they can either keep recipe, industrial process, or so on, a secret, and be protected by “trade secret” laws; or they can “publicize” their secret in exchange for a patent (which they can use to either issue injunctions against competitors or to extract royalties).

Although these arguments have been gaining some steam, they are still a minority view. Critics often refer to profit motives for inventors. “Without IP, an inventor can never trust anyone they tell their invention to. Unscrupulous businessmen will take advantage of them, and reap all the profits without paying a dime to the person who originated the idea. This injustice will mean that no one will have any incentive to sharing their innovations, and so society will stagnate.”

In a working paper titled Designing a Market for Secrets, I explore this topic in detail. Here, I give the basic outline of how a market for secrets could work. I then follow up the theory with some real life examples that come close. END_OF_DOCUMENT_TOKEN_TO_BE_REPLACED

Public goods in economics have been a contentious theoretical issue since Paul Samuelson introduced the concept in 1954. The main sources of contention are what real world things are public goods, and who should provide them. In this post I propose a new way of looking at goods that will shed light on why public goods have posed such a problem. In particular, I propose that there is an important distinction between physical goods and immaterial goods; that public goods can only be immaterial goods; and that this unique feature of public goods does not preclude the market to provide the “socially optimal level.

The implications are that public goods cannot be provided by a free market, because no one would have to pay for such a good, and so there would be so incentive to produce it. Therefore, the argument goes, the government ought to provide public goods. 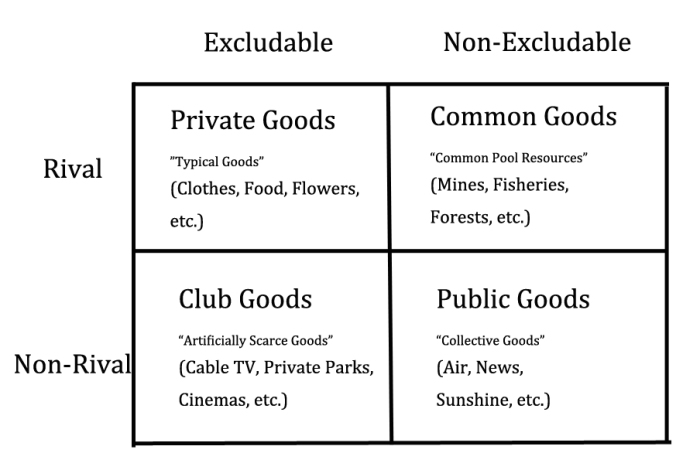 END_OF_DOCUMENT_TOKEN_TO_BE_REPLACED

In economics, there are two types of numbers that we use. Cardinal numbers express amounts. For example, “one”, “two”, “three”, etc. are all cardinal numbers. You can add them, subtract them, or even take them to an exponent.

Money prices are cardinal, which is why you can calculate precise profits and loss.

On the other hand, ordinal numbers express ranks. For example “first, “second”, “third”, etc. are all ordinal numbers. It doesn’t really make sense to talk about adding (or subtracting or exponentiating) ranks.

Almost all economists believe that utility is ordinal. This means your preferences are ranked: first most preferred, second most preferred, and so on. Here is a made up value scale: END_OF_DOCUMENT_TOKEN_TO_BE_REPLACED

According to The Economist, the latest US federal budget includes incentives for “congestion pricing” of roads.

Ostensibly, this is about reducing congestion. But some municipalities like the idea of charging for roads because it represents a new revenue stream. This creates an incentive to charge a price above cost. When a firm does this, we call it a “monopoly price.”

But when a government monopoly forces you to pay a fee to use a good or service, do not call it a price. It is a fee that a government collects by fiat. In other words, it is a tax.

A price is a voluntary exchange of money for a good or service. The emphasis on voluntary is important, because it is this aspect of the price that enables economic calculation for what people really want.  Even a free market “monopolist” (however unlikely or conceptually vague it may be) engages in voluntary exchange. END_OF_DOCUMENT_TOKEN_TO_BE_REPLACED

Imagine if all your favourite economists were also bodybuilders, power lifters, or just generally into fitness. What would their names be?